The Architecture of Neural Networks 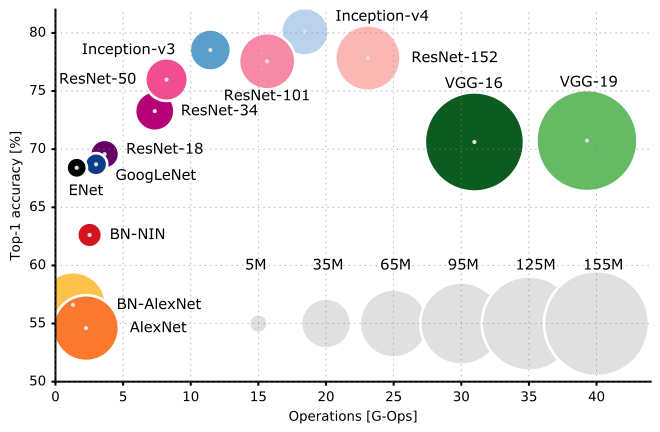 In 1994, the first complex neural network, LeNet 5 was created and this launched Deep Learning exploration. LeNet 5 architecture was rudimentary, especially the fact that image details were spread out across the entire image and convolutions with learnable frameworks are a good way to pick out feature at multiple locations with little parameters.

From 1998-2010, neural networks were in the early development stages. Few people noticed their increasing power yet lots of researchers made progress in this area. More and more data became available due to the rise of cell-phone cameras as well as low-cost digital cameras. Computing power was also gaining steam since CPUs became faster and the GPUs became a general-purpose computing tool. These trends contributed to the slow progress of neural networks and made the tasks they accomplished more interesting.

A deeper and much wider version of LeNet was created by Alex Krizhevsky in 2012 which won the ImageNet competition by a wide margin. It expanded the insights of LeNet into a significantly large neural network which can be used to learn much more complex objects and hierarchies. The innovations were the use of rectified linear units as non-linearities, overlapping max pooling and using GPUs NVIDIA GTX 580 to reduce training time.

During that time, GPUs provided much larger numbers of cores than CPUs as well as 10 times faster training time which led to the use of larger datasets and grander images.

The success of this project started a revolution. Complex neural networks became a staple of Deep Learning which became known as “big neural networks which can accomplish useful things.”

This network had a great yet simple idea of using 1X1 complexities to enable more combinational power to the layers of complexity layers.

The strength of MLP can significantly increase the effectiveness of individual complexities features by combining them into even more complex groups. This is the very same idea used later on by ResNet and Inception. It incorporated an average pooling layer as a component of the last classifier, a practice that will become standard later on.

Christian Szegdy form Google, started a quest to find a method which reduces the computational demand of deep neural networks thus creating the GoogLeNet, the first of its kind inception architecture.

In the Fall of 2014, when Christian Szegedy created GoogLeNet deep learning models became very useful for categorizing the content of images and video frames. Even the most ardent skeptics conceded that Deep Learning and neural nets are here to stay. Since these techniques were very useful to internet giants such as Google, they became interested in the efficient and wide allocation of architectures on their servers.

Christian Szegedy’s goal was to reduce the computational demand of deep neural nets, yet at the same time retaining state-of-the-art performance, or at the very least keeping the computational cost at the current level. With this goal in mind, he and his team created the Inception module: 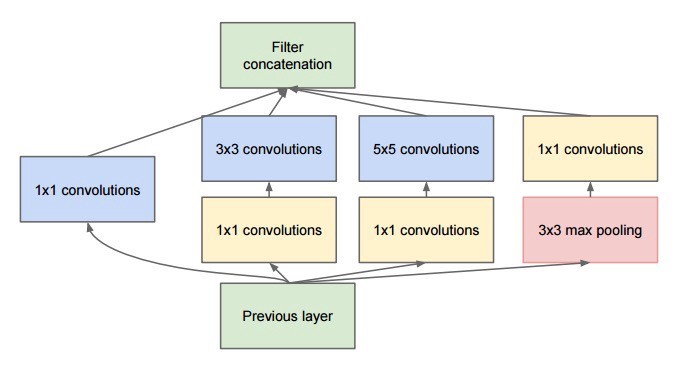 At first, it may seem that this is a parallel combination of 1X1, 3X3 and 5X5 convolution filters, but upon closer examination, we see that by using 1X1 convolution blocks he reduces the number of features before the parallel blocks, something that we refer to today as “bottleneck.”

The “bottleneck layer deserves a section of its own, but GoogLeNet uses a classifier that has a low number of operations compared to AlexNet and VGG. It uses median pooling plus a softmax classifier similar to NiN and a stem without inception modules as part of the first layers.

The bottleneck layer of Inception was inspired by NiN and reduced the number of features and operations in all layers thereby keeping the inference time low. The number of features was reduced by nearly 4 times before passing the data to the expensive convolution modules. This led to significant savings in computational cost and ensured the success of this architecture.

Let’s take a look at this more closely. Imagine you have 252 features coming in and 252 coming out and the inception layer performs 3×3 convolutions. We end up with 250X250 X 3X3 convolutions that need to be performed. This is more than the entire computational budget we have to run this layer in .5 milli-seconds on a Google Server. We can reduce the number of features that must be convolved to 63 or 252/4. First, we perform 252-> 63 1X1 convolutions and then 63 convolutions on each branch and an additional 1X1 convolution from 63->252 features back once more. In total, we get about 70,000 operations instead of almost 600,000 we had before.

Even though we are doing fewer operations, we retain generality in this layer. The bottleneck layers perform remarkably on the ImageNet dataset. The reason it was so successful is that the input features are correlated and the repetition can be removed by combining them as needed with the 1×1 convolutions. Then, they can be expanded again into a meaningful combination for the next layer after convolution with a smaller number of features.

As for the future, we believe that creating neural networks is critically important to the progress of the Deep Learning field. We could speculate into why we have to invest so much time in the creations of architectures instead of using data to tell what to use and how to combine modules. Although this would be very helpful, it remains a work in progress. Also, it is important to note that so far, we have talked about architectures for computer vision. Neural networks architectures have been created in other areas as well and it is interesting to study how these architectures evolved for all the other tasks.

The future is sure to bring many wonderful innovations and software development solutions in the world of neural network architectures. These innovations will also have practical applications and making all of our devices smarter and easier to use.

4.49 5.0
21 Reviews
RECENT POSTS
NRF 2020: Results that Innovecs Has Delivered
NRF 2020, the biggest retail conference in the world, took place on January 11-14th in New York at the Javits Center and brought together the best minds of the retail industry. The conference provided insight into the retail industry, introduced new technologies, trends, and services. NRF 2020 allowed for networking opportunities and making new connections. This retail big show featured over 400 top industry speakers, 40000 attendees, and 200 workshops and sessions. This year, the list of speakers included experts from companies such as Amazon, Alibaba, Microsoft, Ralph Lauren, Samsung, Mastercard, Reebok, Marks & Spencer, American Express, and others, and others.
News, Retail & eCommerce
Machine Learning In Healthcare To Enhance Your Solution
The American Hospital Association has published its 2020 strategic report to the Healthcare IT News Platform. Among the other top trends, machine learning in healthcare as an effective solution was singled out. Telehealth and AI technologies were also emphasized as being capable of helping health systems in dealing with staff shortages, impacting the skills and competencies needed, securing patients’ health records, and increasing clinical opportunities immensely.   Widespread usage of machine learning and AI is predicted in the following fields: administrative, financial, operational, and clinical. Considering these facts, custom healthcare software development seems to be highly demanded to improve monitoring of people’s health, assist in disease predictions, and protect data. Let’s see it in more detail.
Article, Healthcare, Machine Learning, Software Development
The Future of Retail 2020: Top 4 Retail Industry Trends
Matthew Shay, president of the National Retail Federation, commented on the retail industry’s achievements in 2019 and provides insights into the future of the industry in 2020 in the December 30th, 2019 episode of the NRF podcast.  He stated that 2019 was an amazing year for the industry with a lot of accomplishments. Regardless of multiple uncertainties in the political environment, such as the impact of the US-China trade war or US-Canada-Mexico relationships, retailers have found ways to become successful.  According to Mr. Shay, in 2020, the industry will keep transforming digitally and adapting to new political and economic fluctuations. At the NRF 2020 conference this year, hundreds of industry leaders will discuss retail trends. For those attending the event, we have outlined the top retail technology trends to help prepare for the big show.
Article, Retail & eCommerce, Machine Learning, Software Development
Table of Contents
LET’S TALK